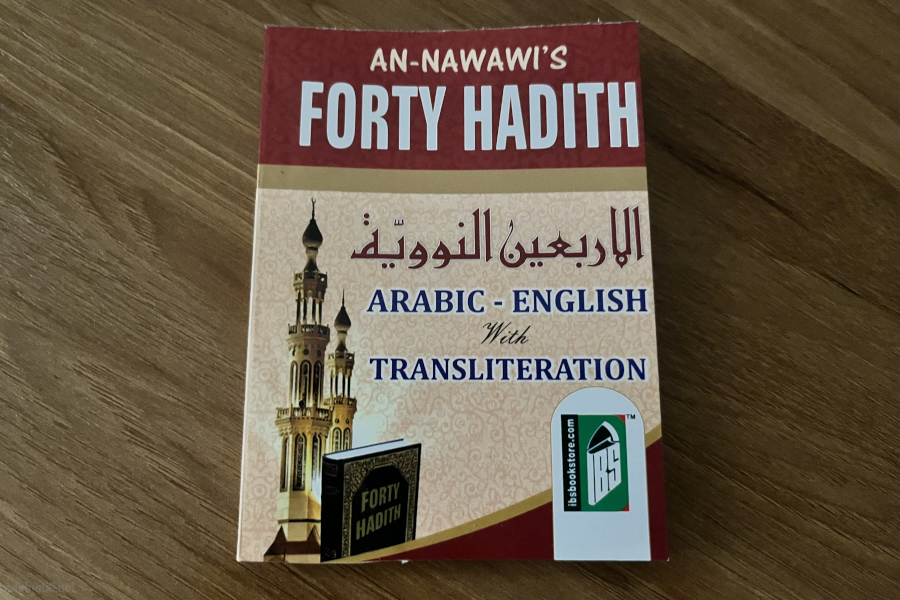 Recently, I've read Forty Hadith, which is an amazing book masha-allah. It is a book which contains, as the title says, 40 ahadith, which are put into sections that match their topic.

This book was compiled by Imam An-Nawawi, an early scholar who compiled lots of other hadith books that was born in Syria. He had also compiled many other books, his most known is, of course, the infamous Forty Hadith which I am reviewing.

Forty Hadith is a collection of 40 ahadith taken from multiple authentic hadith books like Sahih Al-Bukhari and Sahih Muslim. It is a great source of knowledge, and contains amazing ahadith.

I honestly think this is a great book for those who are interested in the topic of Ahadith.

The book starts off at the section "Deeds depend upon intentions" which begins with the Hadith:

On the authority of the Chief of the believers, Abu Hafs Umar ibn al-Khattab (radi allahu anhu) who said:

I heard the Messenger of Allah ﷺ saying:

A few highlights regarding this book:

3. Ahadith is sorted into different sections, making it easier to find specific hadith

Heres another hadith from the book I found interesting:

On the authority of Abu Huraira (radi allahu anhu) who said: The Messenger of Allah ﷺ said:

"A Muslim is the brother of a Muslim: he neither oppresses him nor disgraces him, he neither lies to him nor does he hold him in contempt. Piety and righteousness is here -- and he pointed to his breast three times. It is evil enough for a man to hold his brother Muslim in contempt. The whole of a Muslim for another Muslim is inviolable: his blood, his property, and his honour." (2)

This hadith tells us the right etiquette of a Muslim.

To sum it up, Forty Hadith is a short collection of authentic ahadith. This book is just truly amazing. May Allah have mercy upon Imam An-Nawawi for his amazing works, as well as his family.